Taekwon-Do Study Companion, volume β΄
The second volume of the series “Taekwon-Do Study Companion” (TSC) is now complete. Part I deals mostly with ITF technical issues, most of them “details”, but it must be acknowledged that “The Devil is in the details”. Several issues had to be left out in order to keep Part I only up to page 99. If approached with an unprejudiced mind, most Masters and Grandmasters would agree that these details should eventually be fixed. Putting them down in written possibly qualifies as a first step towards a more final solution and discussing them in ITSs and IICs may further contribute towards this end, especially if the participants are already familiar with the topics to be discussed. Part II deals with “Vital Points (Kupso)”, starting with the Founder’s original information about the 49 VPs included in the 15 volumes set of the “Encyclopedia of Taekwon-Do”. Medical information has been added, regarding Anatomy and Physiology, with a hint of Acupuncture and the Energetic approach and several medical illustrations have been used in order to broaden the horizons of the scholar Taekwon-Do practitioners. The scope of all this medical information remains the martial artist’s point of view and how to use all this knowledge in a real lifethreatening situation, making the second volume extremely valuable to non ITF or even non Taekwon-Do practitioners. All relevant illustration was deliberately limited to the available pictures of the Encyclopedia, proving the authors’ point that Vital Points Study was already present in the first edition, back in 1983. It may appear incomplete or imperfect, but it is definitely there. It was a conscious choice not to use pictures of the authors executing specific techniques, since this approach would automatically introduce bias. Naturally, when controversy arises, there is no hesitation for amendments, clarifications or corrections. Yes, corrections. The original work contains several mistakes. Some of them still elude us, some have been dealt with sufficiently well, but it is likely that some of our superficially heretical suggestions are incorrect. We are totally ok with this eventuality and we totally accept responsibility, since “Verba volant, scripta manent ”. This means that the authors no longer have the luxury of going back in order to change or “interpret ” their opinions, because they have already put it down in written. Probably most senior practitioners may recall oral amendments of the oral teachings of their seniors and subsequent reversal of what everyone present originally understood, still common practice in several seminars. The reader may now read, as many times as he likes and at his own pace, the contents of this volume, ideally in direct comparison or even better juxtaposition with the “Encyclopedia of Taekwon-Do”. Whether he finally agrees with all TSC conclusions and reaches the same destination as ours is not as important as the journey itself. Finally, TSC was written in English, exactly like the original work it is based on. There must be a reason for this, too. 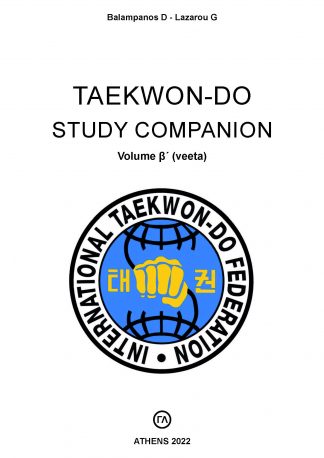